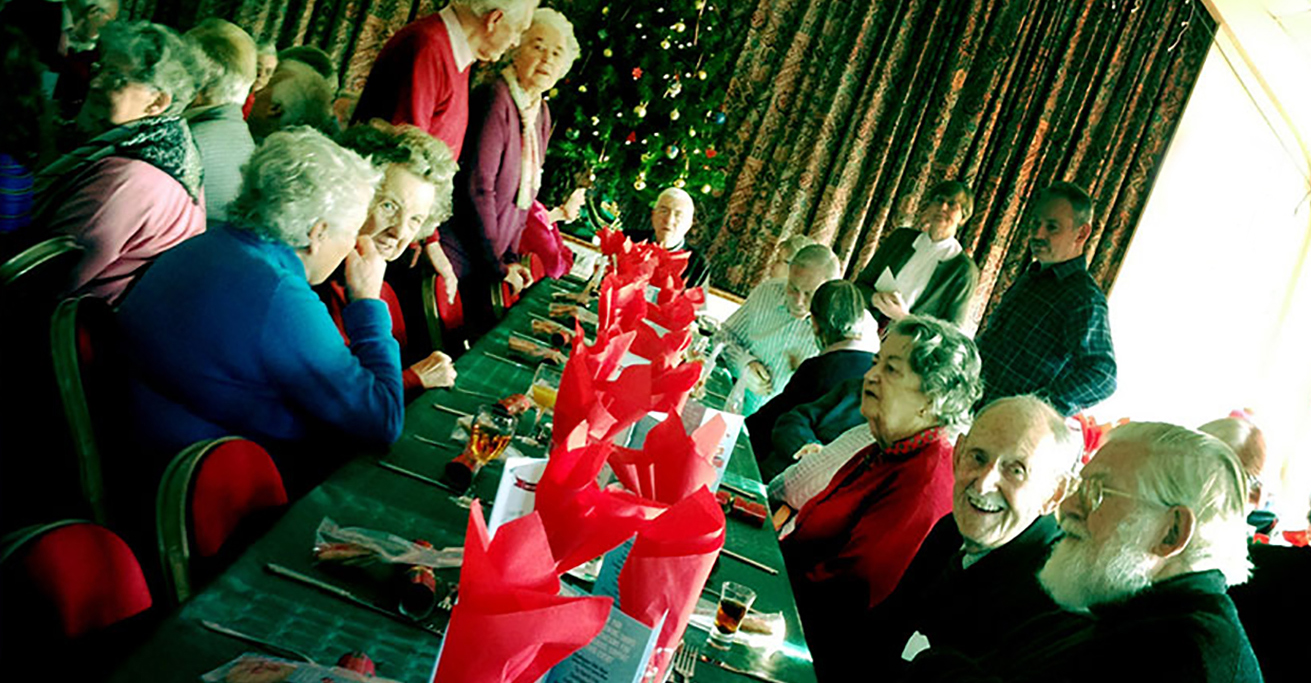 The chatter, the clattering plates, the clinking of glasses all the hustle and bustle of a family Christmas rekindled.

When you think of Christmas you generally think of families, presents, parties, Christmas carols, complete self-indulgence and generally having a good time as well as the obvious religious occasion.

There is nothing more grounding when you find out that one of your elderly community is not only going to be on their own at Christmas but will also be having soup for their Christmas lunch, just another day for them. Although, maybe more lonely, knowing of the festivities going on around them while they sit alone.

This was quite a poignant moment for me. What could I do? Maybe they are not the only ones not having a family Christmas! Then I started thinking about how isolated these once active community members become as they get older, and how lovely it would be to reunite them with their old friends. So that’s what we did…

My poor friends usually run for cover when they hear that ‘I have an idea!’ On this occasion, however they were 100% behind me.

Last year we piloted the idea of organising a Christmas Lunch for the older generation in the village. Getting the guest list was the trickiest aspect, but after a meeting with Tracy, our local shop manager, she was able to come up with a quite comprehensive list. All I needed to do was to find out the addresses and send out the invites. We booked the village hall and anyone who was unable to get out was offered a ‘meals on wheels’. Key helpers seemed to slip into relevant rolls – cooking, serving, delivering, washing up and the whole event was a massive success.

Moving on to this year, with our enthusiasm for the event and rekindling the real meaning of Christmas, offers of help came flooding in. Mark-making kindly offered to design our invites and menus and to produce some gorgeous home-bakes for the guests to take home. Offers of roasting potatoes, serving, setting up, monetary donations were all gratefully received, some from people I didn’t even know. Wow, how humbling is that?!

In Mid-November, the beautifully designed invites were delivered. Three dark, wet evenings were spent trawling round the village with my enduring husband. Once they were out then we just had to wait for the replies. Ceci (catering extraordinaire) and Sue (WI and baker/organiser for most things in the village) and myself were on hand to receive the acceptances and by the 30th November we had our numbers – 63 guests and 19 meals on wheels.

Everything was going to plan. Volunteers were in place, the shopping list was done and we all knew what we were doing (pretty much).

On the 5th December – disaster!! As I was walking down the stairs, I slipped, ended up in a heap with an excruciating pain in my shoulder!! This couldn’t be happening!! My husband called for an ambulance and after a night in A and E it was found that I had dislocated my shoulder!! It was put back in place but the advice was to keep it in a sling for 5 weeks!! The words ‘chocolate teapot’ came to mind! With only a couple of weeks to go, I was rendered useless, I couldn’t drive, lift, shop… I could use the phone and the Ipad though albeit with one hand.

People were amazing, some very good friends and family stepped in to help with all the manual chores. Sarah took me to Tesco for the last few bits of shopping and drove me around the village on the Saturday before the event, to distribute the potatoes to the willing volunteers. We had set up the tables in the hall, decorated the tree, hung the fairy lights and set the kitchen up. We thought we had ticked every box, until Ceci asked if we had got the sausages from the butchers. Oh no, we hadn’t and by now they were shut. Our butcher is usually predictable and starts most evenings with a quiet pint in the pub. So that’s where we went… Sorry Martin.

The day of the lunch

On the day of the event Sunday 16th December, the sun was shining. This is important when you are trying to get 63 OAP’s to the hall. A bit of bad weather and they can quickly go off the idea. At about 10.30 the helpers began to arrive.

There was plenty to do – but just like the previous years the volunteers were amazing, they saw what needed doing and just did it!!

At 11.40 am everything that could be done had been done and we waited… It was a quiet moment … the calm before the storm!! The feeling of anticipation spread through the hall, the wonderfully decorated tables, the glistening fairy lights, the glasses full of port, sherry and juices were all beckoning the first guests. At 11.50 (10 minutes early!!) they began to arrive and so the crescendo of chatter began. The hall soon filled up, some were able bodied, others on frames, walking sticks and some in wheel chairs but apart from one person, they all made it.

As they got themselves to their places everything was in order, the kitchen crew poised and ready with everything but the turkey!! Oh no, it was running late … a few anxious minutes and it had arrived. It smelt fabulous – it’s Christmas I thought to myself. Our vicar, Mark Abrey had kindly come along to say Grace. Silence fell upon the hall as the prayer was said…Within a nano second of it finishing the hall came alive once more.

The chatter, the clattering plates, the clinking of glasses all the hustle and bustle of a family Christmas rekindled (albeit a large family). The dinners were served with great efficiency, the ‘meals on wheels’ team were out on the road, glasses were being topped up, it all ran like clockwork.

Okay, so nobody’s perfect. We ran out of gravy! Tracy to the rescue! Off to the shop for a lifesaving pack of Bisto! I know it’s not quite the same but well…It was an emergency! I don’t think that anyone noticed.

As they tucked in to a wonderful feast of roast turkey and all the trimmings followed by Christmas pudding and mince pies, who should walk in? David Cameron! Accompanied by 2 body guards and 2 bottles of port, he wandered around and chatted to the guests and said a little speech – a real bonus.

With all the plates cleared we moved our guests over to the Sport Club, a short walk across the car park. This gives them an opportunity to have a comfy seat and to chat to someone different. Here another amazing team served them with tea, coffee and after dinner mints. While they enjoyed their beverages the school children came and sang a selection of war time songs and carols. They were absolutely lovely, their little faces with the sun shining on them, certainly melted my heart and I’m sure it did our guests too.

Finally, we drew the tickets for the free raffle. There were a number of prizes and as with most raffles it did go on for quite some time.

People now began to disperse although a few stayed around to help with the washing of the cups. The hall tables had been magically packed away and the kitchen clear of pots and pans. We locked the hall for another year and look forward to the next. We did it!